Wireless Audio is so important for gaming, there are lots of reasons why but the main one is that cords just get in the way when you are lost in a frenzy of mouse clicks and keyboard mashing playing your favourite multiplayer game. That’s what makes it so important that one of the leaders in gaming-focused headsets has set a new benchmark by releasing the GSP-670, an immersive experience in audio excellence.

The GSP 670 by EPOS | Sennheiser is the flagship headset in the expansive locker that this mighty partnership has designed. A step up in overall look and feel with the extra added bonus of being wireless as well. It takes advantage of a USB dongle to plug into your PC or PS4 to deliver the best possible sound in either stereo or 7.1 surround sound. If for some reason you don’t want to use the dongle you can also use the inbuilt Bluetooth connection which is a wonderful example of thoughtful engineering to include both. 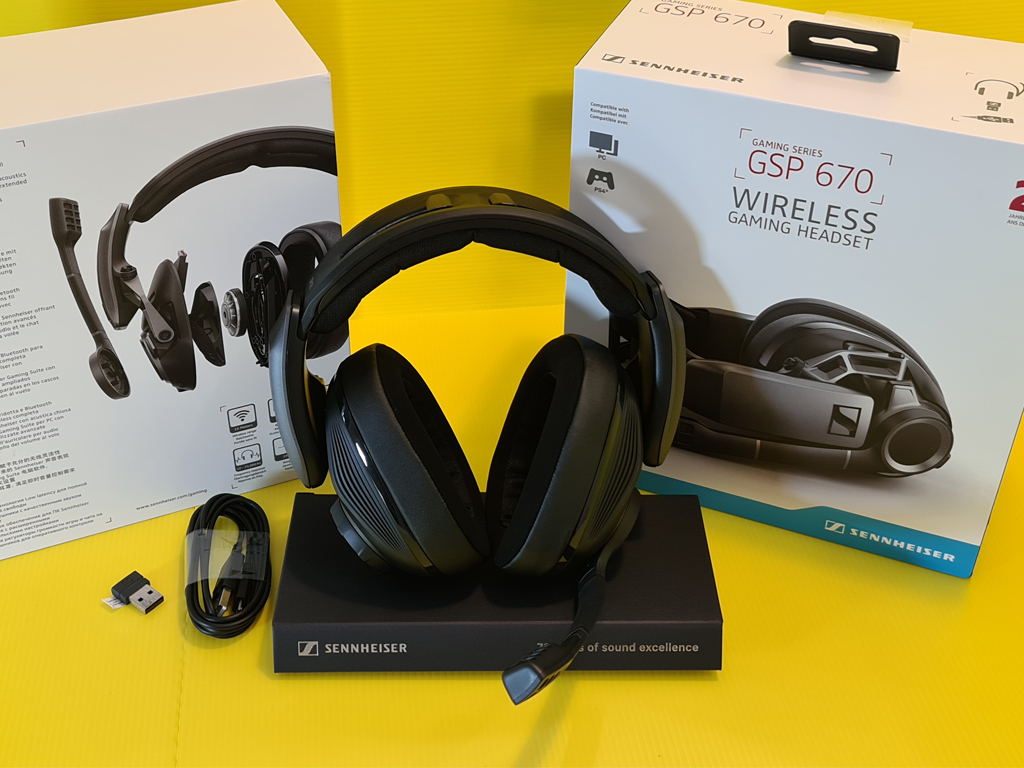 The headphones sit comfortably across the top of your head and around your ears using combinations of soft memory foam padding on the ears and a more delicate mesh across the top. It’s all attached to a very futuristic design. After all, these are predominantly designed with e-sports in mind, that “Future Military” look suits the audience and I’ve got to say appeals to me.

My first impression of looking at the headphones is that they looked like they might be bulky to wear, but once you have them on the lightweight but strong plastics used in the design do away with those preconceptions especially with the help of the sliders.

There are twin sliders inside the headband that turned out to be a really great feature as they allow you to adjust the headset fit and distribute the weight. There is a true understanding here that everyone has a different shape head, so much like adjusting the seat before you get on the exercise bike you need to tweak the slides to get the most comfortable placement for you. After all, these are built for gaming, you are going to be wearing them for long periods of time.

Each ear cup design is more ear-shaped than pure oval, capturing the sound and fit really nicely, the two large rings on either side also serve a purpose, the left-hand side houses the moveable arm for the powerful microphone and the right-hand side is a smooth power switch and volume control that feels the same as turning a large dial on a high-end stereo system amplifier, there’s no stumbling in the dark to find tiny buttons here, a simple turn gives you complete control instantly. 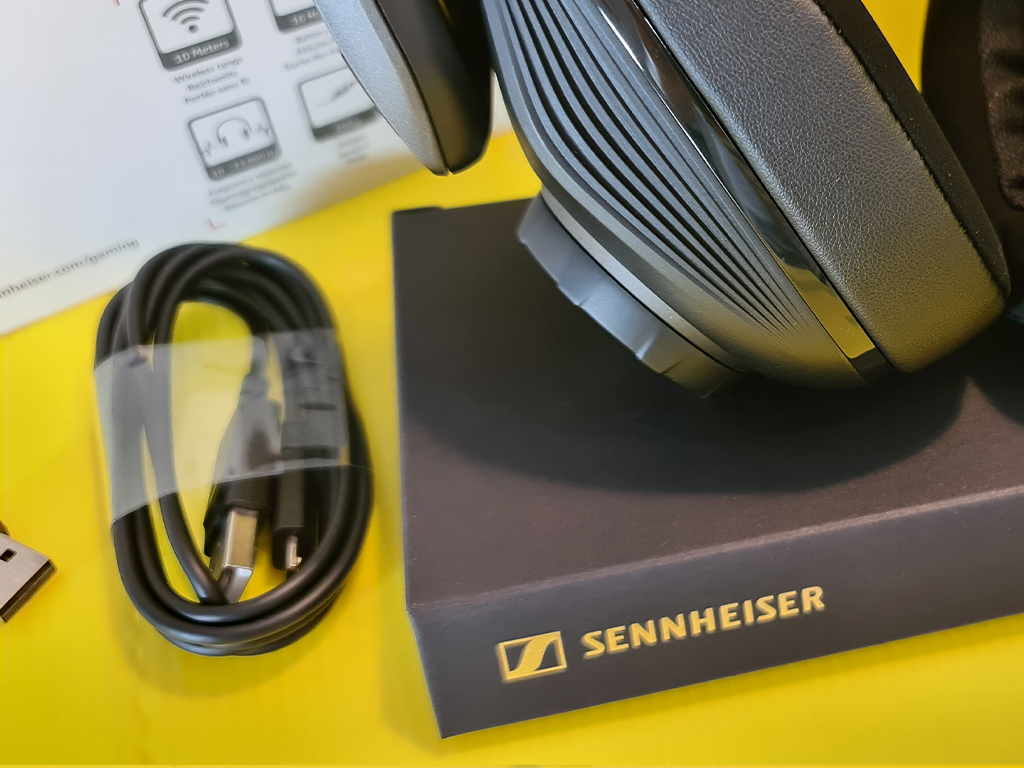 The other buttons and ports on the device include an LED to display the status of the headphones, and a slider to allow pairing mode for a Bluetooth connection. There's a secondary volume wheel just behind your right ear that controls chat volume and a smart button that is programmable, so you can use it to go through multiple equaliser settings based on the type of game you are playing or if you are using them to watch a movie or listen to music, both of which have that distinct Sennheiser sound quality that is incredible. I highly recommend using the gaming suite software so you can adjust to your own preferences, you’ll learn so much more about the sound of your headset in it. Swapping between stereo and 7.1 surround is really easy the program and adding reverb is a nice effect but use sparingly.

The USB port for charging is a micro USB, this can be used to directly connect to you pc or PlayStation so you can continue to play while charging and is of a pretty decent length. I would have much rather seen a USB C connection here, in fact, I’m hoping that soon every port just switches to USB C and we get some form of standard. There's also notably no audio jack on the headset which also felt like a strange omission for headphones, but not one that I’ve really found an issue with as it makes sense that if modern phones and laptops are losing that port it’s not super necessary on headphones anymore.

The microphone is pretty powerful, I’d read “broadcast” quality in relation to it but working in a broadcast media I can say I wouldn’t use these headphones to go to air, there’s a bit too much compression going on. The quality is leaps and bounds ahead of other wireless headsets, but even with the additions of some filter effects in the software to change it to warm or clear it’s really a “esports team broadcast quality”. So you’ll be the best sounding person in your team with no doubt. A strong feature on the microphone is that when you click the arm into the upright position it will mute the microphone, likewise when you move it down to the click position at your mouth it reactivates it, it's a simple but really effective feature that was appreciated. 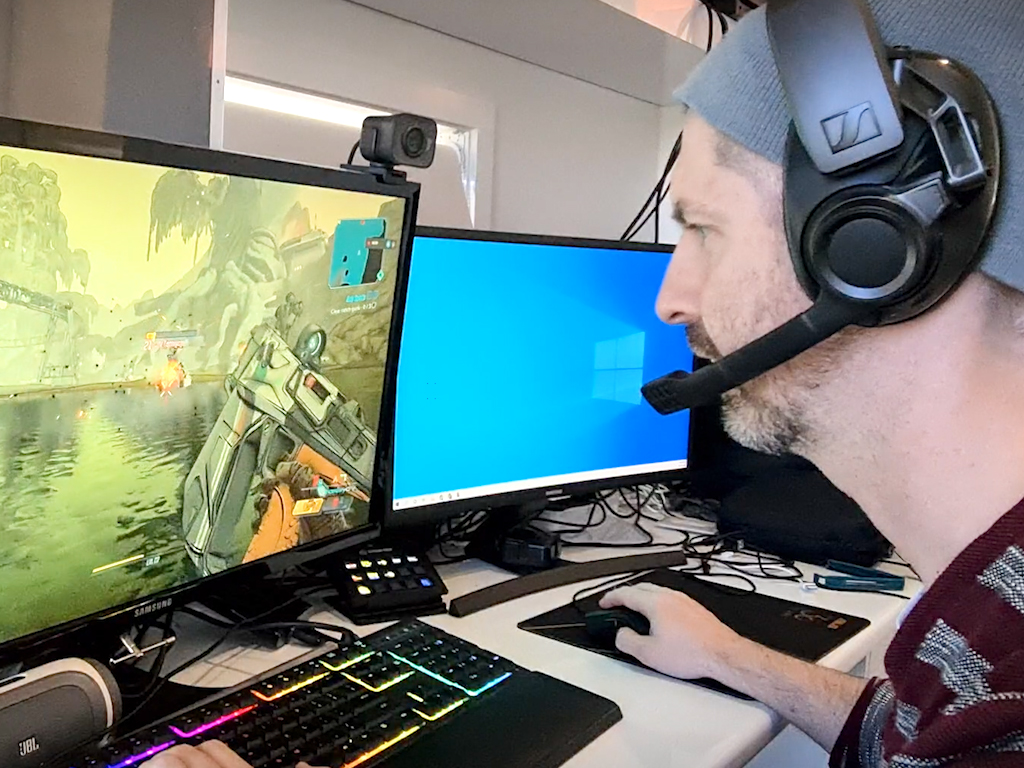 Playing a variety of games felt at times like I was playing them for the first time. Audio plays such a big role in the atmosphere and storytelling and being able to hear gunshots and bullets fly past in a game like Borderlands 3 or even the powerful engines and the crumble of gravel under your car in a game like Forza Horizon 4 really brought out the best in the titles. I think the best moment I had though was when I played Star Wars Jedi Fallen Order, that crisp sound of a lightsaber firing up and closing down was magic every time, lightsaber on.. Lightsaber off.. Lightsaber on... Lightsaber off… I’ll admit I did that for far too long. The detail of the sound is just superb.

The headset delivers on the 20+ hours of use when you are using the dongle, it’s around 16 hours on low-latency wireless and uses fast charge so you can play while you charge and get back to being wireless very quickly. 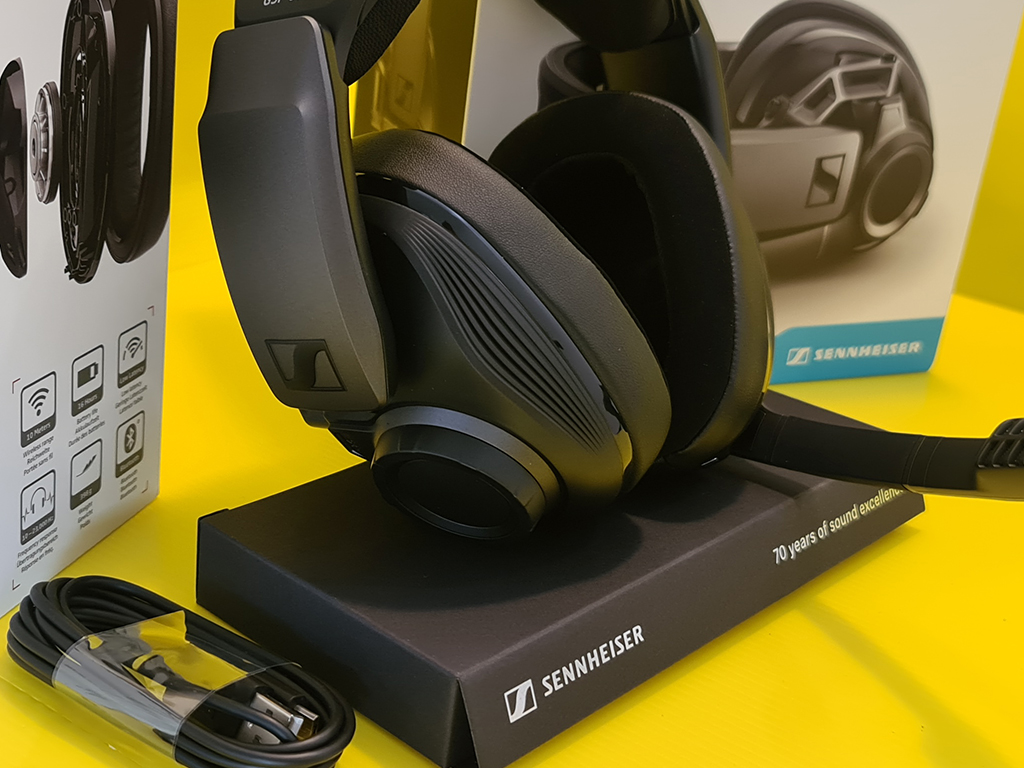 The EPOS | Sennheiser GSP 670 is exactly what it claims to be, an immersive experience in excellent wireless audio for gaming. The fact that it works with both your PC or your PS4 is also a bonus. Using either Bluetooth or a dongle gives you options and the overall quality you notice as soon as you pick them up and place them on your head. These are the flagship for the brand and come in at a flagship price as well with a RRP of $469 in Australia. Worth every cent.

She’s famous for her swag of Grammys, wearing that meat dress and her killer performance at this year’s Superbowl.

Now Lady Gaga is hitting the road on her Joanne World Tour, and we’re sending one lucky listener and a friend to see her Live in LA on the 8th of August.

To get on the standby list, we’re asking listeners to play against each other in a game of Radio Gaga.

We choose the topic and you and another contestant will need to go back and forth naming objects/names within that topic until one of you bows out.

Just register here for your chance to play.

We’ll call back two listeners each time and the last person standing goes through to the final draw.